Scheckler Brothers “She’s Got Me Hypnotized” 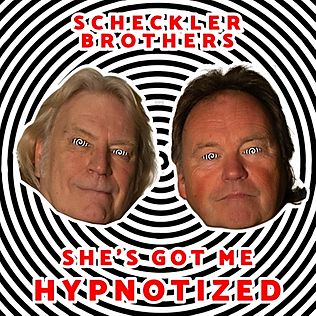 “She’s Got Me Hypnotized” is the latest work by a band that literally formed on February 9th, 1964, the night the Beatles performed on The Ed Sullivan Show. Robert and Tom Scheckler were two young brothers watching, who at the ages of 15 and 8 formed a group called The Scheckler Brothers.

On February 7, 2020, the brothers will release their latest work, a single which will be released worldwide by Retro Records, set to a music video directed and edited by Guzman Gonzalez at Factory Underground Studio in Norwalk, CT.

The video juxtaposes swirling retro-60’s patterns with intoxicating images of striking women, resulting in a visual mix that can only be described as hypnotizing. There is a particularly interesting moment that evokes an image of 1960’s James Bond-stylized cinematography, which the video self-references in the light-hearted intro to the video. As the video progresses, there are changes in patterns and colors that continually draw the viewer throughout the song.

The Scheckler Brothers are originally from Darien, CT, where they spent the majority of their adult lives working outside of music, both raising families, and focusing on careers. Yet, always together as The Scheckler Brothers. Robert, the drummer, and older brother is supportive of Tom with his steady Ringo-style backbeat. Tom, the singer-songwriter and younger brother crafts his music with songs built around his unique style of guitar playing and singing, reminiscent of artists such as The Beatles, The Zombies, The Everly Brothers, and Roy Orbison. His recognizable style is highlighted by colorful lyrics, memorable melodies, and a sense of fun that seems vacantly missing from a lot of today’s music.

The last full album the Scheckler Brothers released was “Magic,” whose title song was about the day they formed their family group watching the Beatles on television for the first time. The song was also featured in a video, which achieved 11,000 views on YouTube. A second video from the album, “Love You So,” was released later on and achieved 12,000 views. Both videos were filmed live at Factory Underground Studio.