Michael Coveto releases new EP “All Or Nothing” 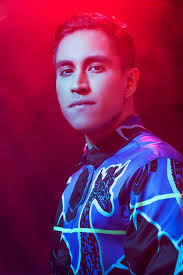 Latin music has become popular since crossing over into America, which is meaningful to Latin-Americans in the United States , but being multicultural is more than just a label , its something that collides deep in your roots, embedded in you to the core and allows you to pull from each culture to create something truly unique and inspiring.

This is exactly what in just over the course of a few years Michael Coveto , has been able to accomplish on his own terms . Bridging a tight gap between high fashion and music , while learning a lot about himself along the way . We had the privilege of speaking with him about his origins , empowering underprivileged youth through his new foundation and the star’s ambitions for global expansion in 2021.

The singer-songwriter turned fashion entrepreneur has inspired Latino youth with how he moves about in both industries. Since its launch in early 2017 his fashion label COVETO, has sold out several collections. Been the topic of hot discussions and has taken part in some of NY / Paris Fashion Weeks biggest events. His music career doesn’t fall far behind. In late 2019 he released his first bilingual single “Strip” featuring Cali Budz, Jay Rivas, Manzur, and Yoga Fire , following up 2020 with a critically acclaimed EP ” All Or Nothing ” He describes the EP’S sounds , features and visuals all to be reflective of his latino heritage and culture. ” I got a chance to work with so many great people on it . It was recorded all over the world and I think the amount of international talent that was involved in putting it together was key in giving it a unique touch… its something I’ve never done before.” says Michael Coveto . Born in Washington DC to parents of Mexican Heritage, Michael Coveto understands all too well the value his multi cultural background opens up for him in 2020 and he’s ready to capitalize big off it. ” Everything happening right now feels natural , nothing feels forced , I grew up in a multicultural household exposed to American and Latin culture from a very young age , I learned to adapt and understand both worlds very well. I think this is essential in reaching my international audience , fans and markets alike. .” says the 26 year old. But it hasn’t always been easy for the young star .  His parents , originates of Mexico . Immigrated to the United States in the late 80’s in search of a better life. “They had nothing, they knew they had to do better . ” he recounts.  He goes on to describe the struggles his family faced growing up just to get by “They came here chasing the American dream , no excuses , no ego’s they did what they had to do … hard labor jobs , you know that kind of stuff . For them it was always about making something out of nothing no matter how bad or difficult things got … Me and my brother didn’t have much growing up but we made the best out of what we did … that taught me a lot about appreciating the little things in life, I know people that have gone through similar situations can relate. ” A feeling that still resonates with Michael Coveto to this day. He describes it as a major inspiration behind starting his own foundation earlier this year  ” With The Coveto Foundation the idea was to start paying it forward to my community the moment ,  I knew I could make a change somewhere, I wanted to start addressing real problems and providing real solutions to things I know first hand are going on. Not just donate somewhere and feel content with doing my part … our first project is underway for early 2021 in Mexico State , once this whole pandemic is over ( Covid-19 ) . It’s in conjunction with a local youth center in the area . We are putting together an after school program for kids in the barrio ( slang for rural neighborhood outside of a big city) . These kids don’t normally have access to computers that could facilitate them to excel in a lot of things like they do here in American schools … It will really help a lot of these less fortunate kids nourish and develop their potential . I want to help empower the new generation of youth. ” He goes on to add ” We are still relatively young as a foundation , so ideally there is still a lot of things that are coming together , but our vision is strong and thats all that matter’s for us to continue growing. ” Michael Coveto also shares some light on the growth he has seen over the past few years since first finding his way into the fashion and entertainment business . ” Its crazy to see things coming together the way they are ,  Building something from scratch and seeing it come to life before your eyes. I remember a lot of people doubted me in the beginning. Definitely hasn’t been easy but I’ve learned to appreciate all the highs and lows . It’s a lot of trial and error but we are here stronger then ever . ” With an impressive social media presence getting bigger by the day ,  multiple fashion shows underway in Paris , New York and Milan for his brand COVETO and his new EP ” All Or Nothing ” already running up massive numbers on Spotify since its release.  Michael Coveto is truly taking the world by storm . Playing out his destiny by his own rules . Don’t believe us ? see for yourself . Links below .