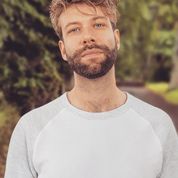 Hailing from rural Aberdeenshire, Scotland, Don Barclay relocated in 2018 to Kent in order to concentrate on music and performing. Just a stone’s throw away from the big smoke, the self taught musician started learning the tricks of his trade at the age of 10. With a self-expressed ‘heart on your sleeve’ approach, Don’s influenced by the likes of Ben Howard, Alt J and James Gillespie.

Stronger is about two people coming together in difficult times and sparking a passion for each other. It speaks of memories ingrained in us from childhood and moving forward in a strong and positive way and using any pain felt from the past as fuel to move on. Another concept is – ‘burn yesterday and bring tomorrow home’-  One of the lyrics from the song.  I once had a dream where my father and I spoke about life then he simply said ‘Now I gotta go’. He passed when I was 17 and I use this in the song lyrics. The song is about hope, passion and strength to be the best version of yourself. Ultimately –  ‘Love’ .